Learn how the library was established and how it has evolved to become such an important part of our community. 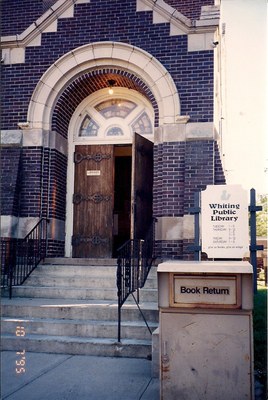 Each of the 5 men contributed $5,000 to form an endowment fund, which, along with contributions from many local citizens, became the seed money for a public library in the new Congregational Church being built. 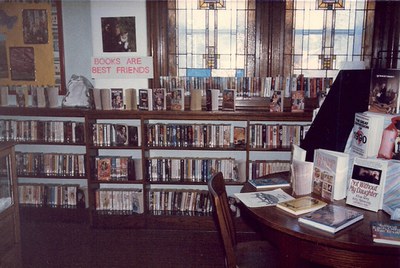 The librarian was allowed to loan magazines during library hours. It was

In 1919, the Board amended the rules to allow the librarian to buy books "in case of emergency" without consulting the book committee.  In the early years, the State Library sent out a Traveling Librarian to provide assistance and support to librarians. This system was replaced in 1973 by the Regional Library System. Northwest Regional Library in Sioux City provided continuing education for librarians and trustees, consulting services and technical assistance.  Dianne Derr of Whiting was the first Northwest Regional consultant. 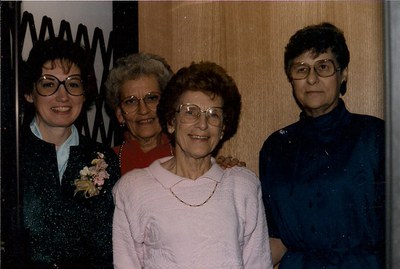 By 1992, the library was drastically outgrowing the 962 square feet that had served the public so well.  Under the guidance of Board president Ruthann Holmes, the Board began to consider seriously the possibilities and pitfalls of a new library. The Board and staff spent hours on the road investigating other libraries, studying floor plans that would best meet the needs of our community.
Eudean Forbes, Fern Garred, Dana Kirby, Carlann Ooten, and Carolyn Westergaard formed a building committee. Their mission was to hire an architect, and raise the funds for the new library. They were determined to raise the money in a year before people lost interest.  Three $50,000 donations were given immediately, by Marian Pike, John & Ruthann Holmes, and an anonymous donor. 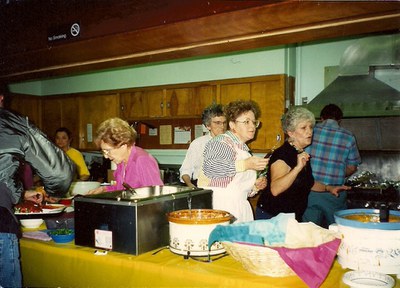 Altogether, nearly 200 volunteers were involved in putting on this event--and that had an effect we had not anticipated. Suddenly the idea circulating was no longer, "The library board is building a new library." Instead it had become, "WE are building a new library," - and the support became phenomenal. The building committee’s creativity for fund-raising ideas was astounding. Some ideas worked – and some didn't. (The typical response of community members asked to help out with the Christmas cookie fair was a horrified shriek, "You want me to bake HOW MANY DOZEN COOKIES???????!)  The Dinner-Theater was an unqualified success, and so was the talent show.  The Sunday roast beef dinners held almost every month were always popular. Our motto became "Feed them and they will come."  Individual groups raised money for the library.  The Badgers 4-H Club sold Christmas wreaths to raise money, then were allowed to pick out special furnishings for the new building.  With donations pouring in, the goal was in sight.

The site chosen for the new library was the former location of the Hazel and Jerry Jones home.  The property was donated by their 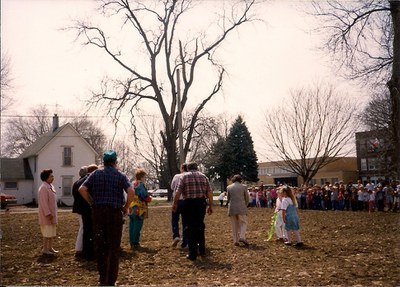 son Skip and his wife Marcia.  In recognition of that, the magazine room was named the Hazel Jones Memorial Reading Room.

A $60,000 bond issue was passed by 84% in the biggest voter turnout in the history of Whiting.  We received a $20,000 grant from the Roy J. Carver Trust.  All other monies were raised through donations. The library was completed January 31, 1996.

We closed the old library for a week to pack books.  While we were packing, the Kindergarten class asked if they could help move books.  Each child was given a plastic bag and half a dozen picture books from the elementary section, and we all trooped over to the new library – where bedlam broke out. Faced with a wonderful selection of empty shelves, each child was determined to pick a separate shelf – until Meg said diplomatically, "Why don’t we let the volunteers shelve the books, and we’ll have a tour of 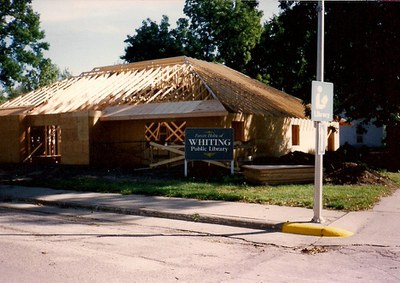 the new library!"  We thought long and hard how to accomplish a move easily, and finally came up with a simple plan.  Each section was assigned a different color of sticky notes – yellow for nonfiction, green for adult fiction, etc. Then each shelf within that section was numbered. We used plastic crates, packing one shelf per crate. Each shelf of books was packed into the crate in order, and the numbered, colored sticky note attached.

In the new library, each section was marked with the matching color of sticky notes, and each shelf numbered.  On Monday, February 12, 1996--Moving Day--the Superintendent dismissed the junior high and high school students in the morning to help move 14,000 books.  Students carried crates out to a flatbed trailer that hauled them all to the new building half a block away.  There the students unloaded crates and brought them into the new library. 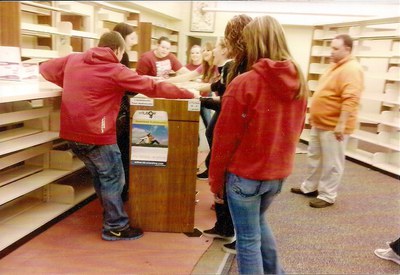 Volunteers at the door met each student carrying a crate and could instantly direct them to the right section according to their colored sticky note.  Volunteers shelved them on the correct shelf--and we opened for business the following day.

Some of the teachers allowed their students to stay extra hours to help shelve books in the afternoon.  We would find children sitting on the floor – all progress suspended - as they became engrossed in a book.  Over and over we heard them exclaim, "I didn't know you had this book!"  For weeks after moving day, children who had never set foot in the library before would bring their parents in, and proudly explain how they had helped move books to the new library.  With a handicapped-accessible building, the Whiting Library was able to complete all State Library of Iowa requirements for accreditation, and 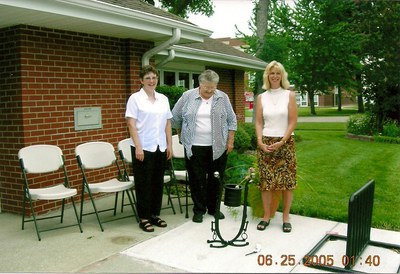 maintains that standard to this day. 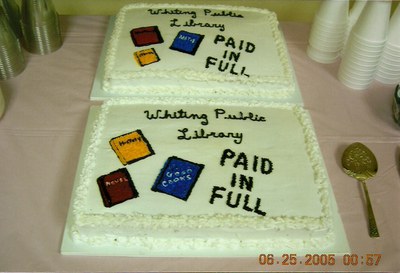 In 2005, the library hosted a bond-burning party, as the library bond was officially retired.  What a good feeling to know the library is "paid in full."

The Whiting Library was the recipient of two computers from the Bill and Melinda Gates Foundation in 2002.  Memorials and bequests over the years have provided many, many books and improvements for the library.  Every gift, big or small, is deeply appreciated.The Sloan State Bank Whiting Office has given generous donation over the years for which we are very grateful.  These donations have provided the library with many items, including office chairs, desks and chairs for the public-access computers, an additional computer, a laminator stand, and a color printer.  Generous amounts were willed to the library by Mrs. Anna Marie Hanson, Flora Kelly, Mary Whiting and Woodson Whiting.  Two grants from Monona County Community Partners enabled us to install automatic front entry doors, and provide a flat-screen TV with DVD/video player in the meeting room.

On Sunday, August 8, 2010, a severe thunderstorm/tornado ripped through Whiting 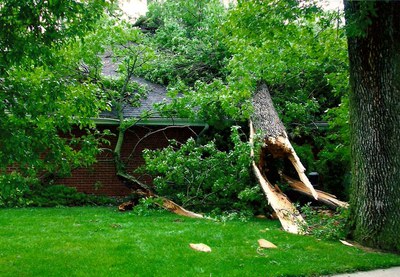 Nearly half of one the maple trees west of the library crashed onto the roof, leaving a massive hole.  The first step in the cleanup process the next morning was getting the tree off the roof.  It was impossible to tell how big - and how heavy - the tree was until the crew got up on the roof.  They finally had to call a tow truck to lift some of the weight.  It took most of the day just to get the tree off the roof.
Rain had poured in all night, soaking the insulation, sheet rock, ceiling tiles, and carpet.  Water dripped off the circulation desk, two computers and three bookcases.  Wet ceiling tiles disintegrated into mush, fell on anything in its path, and hardened. Broken joists and beams had to be replaced and the swimming-pool-sized hole covered to keep out more rain.  The staff and Board members set to work moving the books from five of the tallest bookcases and one lower section to a dry corner of the library, so bookcases could be moved out of the way to dry the carpet.  Four computers were taken to the repair shop to be dried out.

Over the next few weeks, the staff still managed to keep up with interlibray loan requests.  All books had been moved in  - more or 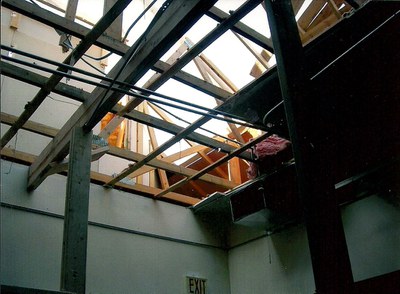 less -  order, so as long as we could pinpoint which pile a book was likely to be in, we could retrieve almost anything requested. The community was so supportive during the five weeks we were closed for repairs, calling to volunteer help - or cookies!  We heard later people called the lady across the street nearly every day to see if our "Closed for repairs" sign had come down yet.

All things considered, we were very, very lucky.  The carpenter said if most of the weight of the tree hadn't fallen across the steel beam, it would have taken out the entire side of the library.  No one was injured, only a few books were damaged, the computers survived, and BF Jacobson did a wonderful job of getting things finished so quickly, despite day after day with a heat index of 105.

Many volunteers helped put things back in order when the construction was done, doing everything from scrubbing plaster dust off shelves, vacuuming up plaster chunks, scrubbing plaster off the kitchen tiles on their hands and knees -  we heard one teenager mutter, "Now I know how Cinderella felt!" - and finally putting all the books back.  Five weeks after the disaster, we hosted an open house to let the community know we were back in business.

April 2013 was a time for celebrating the library's 100th birthday.  There was a flurry of preparation in the months before that.  The interior of the library was completely repainted the first week in December 2012--which meant moving all the shelving units and books along the walls (then putting them all back to wait for the next round of remodeling.)

In January, the new carpet arrived a week early.  With one day's advance warning, a quick call went out to a host of volunteers, who packed up 16,000 books and moved all the shelving.  The carpet-layers started on a Wednesday, and finished early on Friday afternoon.  Volunteers and staff immediately set to work moving shelving back and unpacking all the books.  By the following Tuesday, everything was back in order and the library was open as usual. 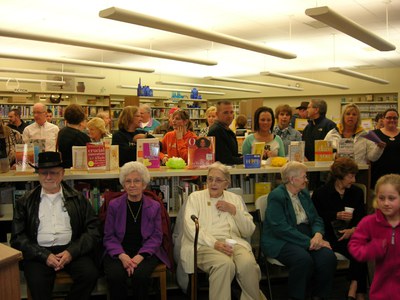 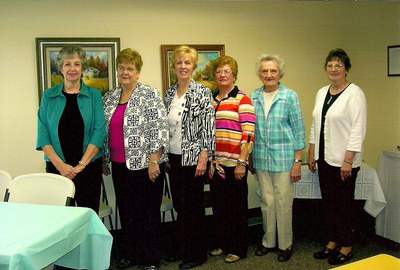 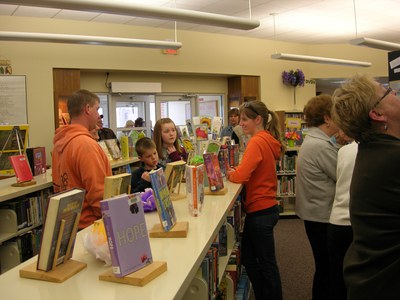 In the early years of the its existence, the library was viewed as just a reading center. Over the years, that concept has changed and the library now functions as a total information center.   Our continuing mission is to enrich the lives of all in our community.